On the eve of the international campaign “16 days of activism against gender-based violence against women”, the municipal coordinators for equal opportunities on October 16, 2020, in Skopje met and discussed the role of local government in the prevention and protection of gender-based violence. A good practice of the Municipality of Strumica for establishing a Shelter centre for victims of domestic violence was also presented at the workshop, organized by ZELS, within the project “Towards Gender-Responsive Municipalities: Strengthening Municipal Capacities for Gender Equality Policies and Gender Responsive Budgeting” conducted with the support of UN Women - Skopje.

According to the global estimates of the World Health Organization (WHO) for 2013, 35% of women worldwide have experienced physical and/or sexual intimate partner or non-partner sexual violence in their lifetime. In our country, according to a survey conducted by the OSCE on violence against women in 2019, almost half (45%) of women in the country said that they experienced psychological, physical or sexual violence from an intimate partner at the age of 15. Only 2% of women who have been exposed to violence by their current partner have reported the case to the competent authorities because they consider it to be the most serious incident of violence. 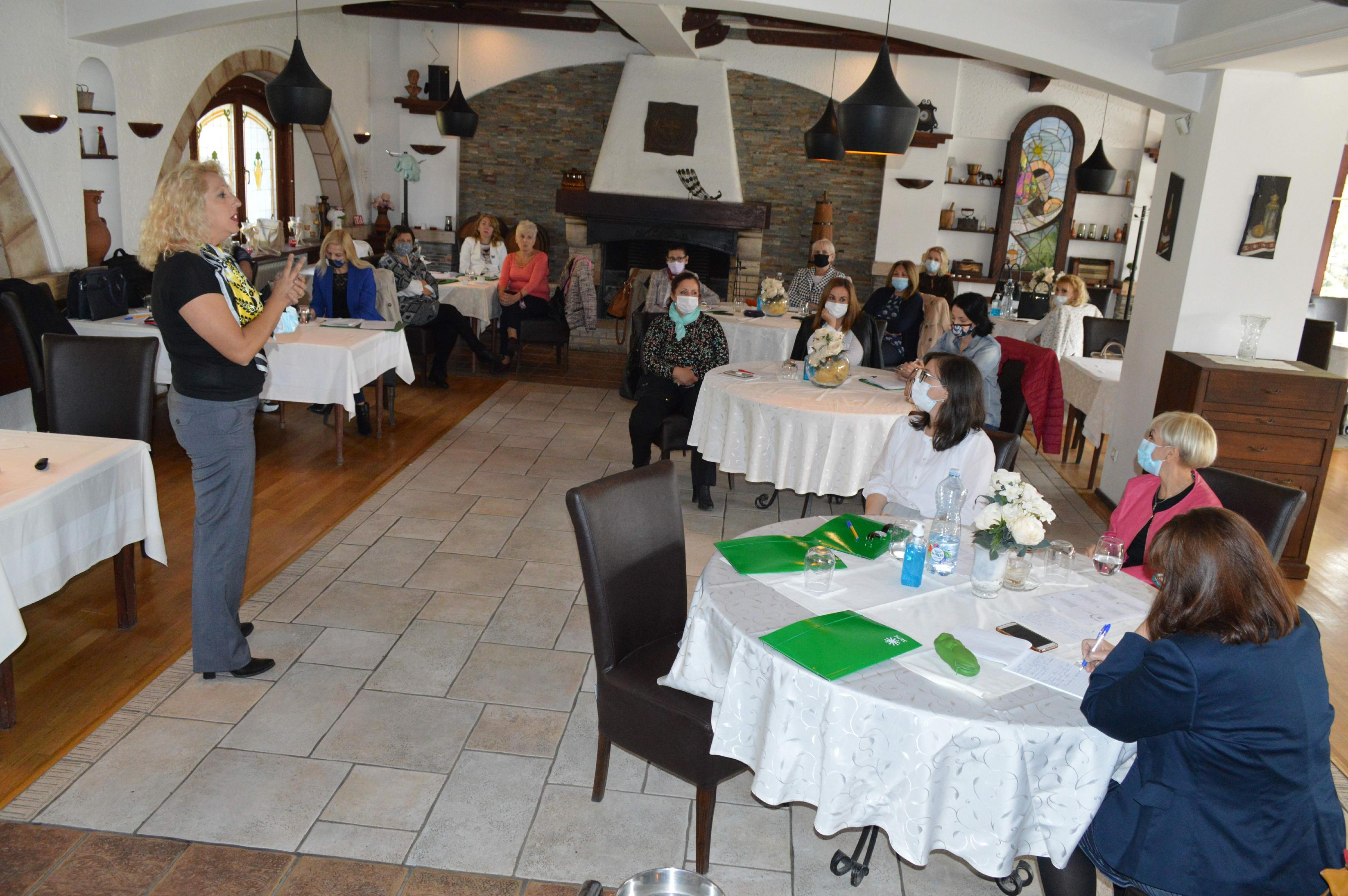 Local authorities involved in the implementation of the Istanbul Convention measures

Blagorodna Shopova, training advisor at ZELS, spoke about the importance of the implementation of the “Istanbul Convention” in our country and the local government units. This Convention on Preventing and Combating Violence against Women, including Domestic Violence, was adopted by the Committee of Ministers of the Council of Europe on April 7, 2011. Our country was among the first countries to sign the convention, but it was ratified in December 2017 and entered into force on July 1, 2018. Immediately after ratification, the state adopted a National Action Plan for its implementation. The purpose of the document is to ensure the design, implementation and coordination of a comprehensive national policy for the prevention and elimination of violence against women. The Convention and the National Action Plan set out measures for local authorities. Thus, the municipalities should develop comprehensive and coordinated policies and provide budget funds for the implementation of the programs. Also, local authorities in cooperation with national institutions or non-governmental organizations should conduct public awareness campaigns on various forms of violence against women and the prevention of violence.

The role of local self-government in the prevention and protection of gender-based violence against women is important. In this regard, establishing coordination of all parties involved in the process of prevention of violence and protection of victims of gender-based violence is of particular importance. Municipalities should establish and financially support specialized services for victims, such as shelters for victims of violence (shelter centres), counselling centres, helplines, free legal assistance and others. It was pointed out that in this period, it is extremely important for the local self-government to establish partnerships with state institutions, non-governmental organizations, private sector and media in the implementation of all activities for prevention of violence against women and domestic violence.

The present coordinators presented the challenges they face in implementing the obligations in this area. The lack of financial funds was emphasized as one of the arguments for the inability of local authorities to take more seriously the issues of prevention and protection of victims of domestic violence. However, as a primary reason, they pointed out the insufficient recognition of the seriousness of the problem of violence against women and the consequences by the local government and the need for a more serious commitment to the issues of gender equality and gender-based violence. It was emphasized that in order to resolve these issues, the coordination between the local administration, and even more so the coordination of the local government with the institutions of the central government is at a very low level. However, as a positive aspect, they emphasized good cooperation with non-governmental organizations in this area.

A positive example was presented at the workshop by the Municipality of Strumica, which last year through a public call for support of non-governmental organizations provided a space of 250 m2 for opening a shelter centre for victims of domestic violence, as well as financial support in the amount of one million and two hundred thousand denars from the Budget of the Municipality. With additional support from 38 socially responsible companies from Strumica, this space has been re-adapted and equipped with furniture and sanitary ware to care for 13 people, victims of violence. After the opening of the shelter centre in Strumica in just one year, 25 victims of violence were taken care of in it.

Stoilka Miteva from the Association “Skaj Plus”, who manages the shelter centre, spoke about the establishment and functioning of this shelter centre of the Municipality of Strumica and spoke enthusiastically about the challenges she faced throughout the process of its establishment. She pointed out that, as a journalist, she followed cases of domestic violence more often, and found that if they are encouraged and report violence, they have nowhere to be taken care of and away from the perpetrator. In the beginning, she was surprised by the often insufficient engagement of the institutions dealing with such cases, which prompted her to make a documentary about the experiences of victims of domestic violence in the Strumica region and their life journeys after reporting violence. The focus of the documentary was – “victims of domestic violence - victims of the system”.

According to the Istanbul Convention, there is a need for a shelter centre per 50,000 inhabitants, and the Strumica region, where certain indicators show that the numbers of victims of domestic violence should not be neglected, doesn't have such centre. Fortunately, Ms Mileva's suggestion regarding this issue was accepted by the Municipality of Strumica. She also expressed great gratitude to all the companies that immediately got involved to help. “I wanted these victims to get a real home, and I even took personal items from home and took them there to get a family atmosphere. And now they really have a real home, but we still can not remove the serious barriers they face in the institutions. I think that with the support of the local government, we will soon win this battle as well," said Stoilka Miteva. She sent a message to local government representatives that it is primarily necessary to strengthen the coordination and capacities of multi-sectoral teams to protect victims of domestic violence. The municipality is expected to contribute to the prevention of violence against women and improved protection of victims. She also appealed that the institutions be more open-minded and consider opening as many shelter centres in the country as possible.

At the workshop, the coordinator of the Project “Towards Gender-Responsive Municipalities: Strengthening Municipal Capacities for Gender Equality Policies and Gender Responsive Budgeting” (2019-2021), Irena Nikolov, reminded the participants about some of the activities in this area implemented by ZELS, in support of the local government. She emphasized the activities for strengthening the capacities of the coordinators and the commissions for equal opportunities from the local government; the preparation of a Handbook for communication of the coordinators for equal opportunities between women and men in the LSGUs; then the development of a Methodology for the integration of the gender perspective in the municipality in the local policies and budget; the development of strategies for gender equality; the upgraded electronic platform for gender-responsive budgeting www.rob.zels.org.mk, with new tools for gender-disaggregated data and others. It was especially emphasized the establishment of a functional working group in which some of the coordinators are members, as well as the Lobby - group for gender equality within ZELS, composed of women mayors, mayors, women councillors and councillors, who in this period have a special role in lobbying for adoption of appropriate amendments to the Law on Equal Opportunities, which is in the process of preparation and envisages a series of obligations for local authorities, but also strengthening the role of the municipal coordinator for equal opportunities.