On June 29th, 2021, the Thematic Working Group on Urbanism and Spatial Planning held a working meeting in h. Hilton, Skopje, organized by ZELS and UNDP. This working group was established within the project “Strengthening Municipal Councils”, which is implemented by UNDP along with ZELS and the Association of Financial Workers, with financial support from the Swiss Agency for Development and Cooperation-SDC.

The meeting was attended by roughly 20 presidents/women presidents of councils and presidents/women presidents of the Commissions on Urbanism and Spatial Planning who are members of this thematic working group on urbanism and spatial planning. The main emphasis was placed on the following topics: presentation of the concept and the importance of public space and illegal buildings and challenges of local self-government and the Draft Law on Determining the Status of Illegally Constructed Buildings, which was moderated by the expert in the field of urbanism, Danica Pavlovska. The role of the local self-government in fulfilling the basic conditions for concepts of the public space was emphasized at the workshop, while the second item regarding the status of illegally constructed buildings on the territory of the municipalities caused more discussion among the participants. 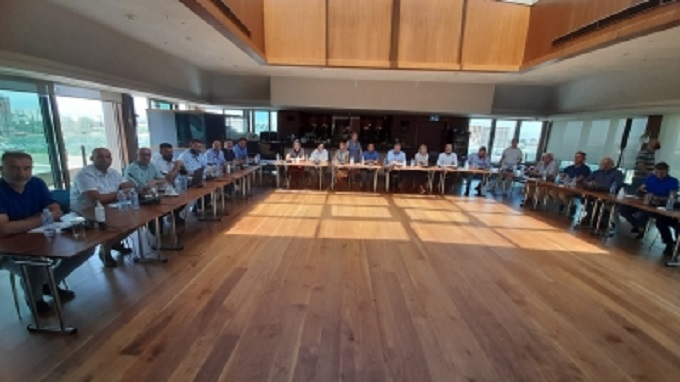 Most remarks and challenges, noticed generally by the municipalities, were in the lack of detailed urban plans that would regulate the status of illegally constructed buildings, the deficit of experts (civil engineers) in some municipalities, insufficient and inefficient inspection supervision in municipalities, non-compliance with laws and the legal regulations and the dilemma for the initiated legalization procedures for which the old law no longer applies and other dilemmas.

In that regard, after the discussion regarding the items, the following recommendations were adopted:

A representative from the municipality to participate in the Commission for inspection of the illegally constructed building, provided by the Law on Determining the Status of the Illegally Constructed Buildings;

The new legal regulations should refer only to a certain social category of owners of illegally constructed buildings;

Each case of an illegally constructed building should be treated individually to avoid any possible abuse;

The mechanism for controls and prevention of construction of illegally constructed buildings should be strengthened;

The establishment of communal wardens should be stimulated;

Informing the public and more intensive campaigns to raise awareness among citizens;

Greater competencies of the local self-governments in preparing detailed and general urban plans (DUP and GUP);

Financial incentives for the experts in the municipality in the field of urban planning;

Greater support to the municipalities and lobbying by ZELS in making important decisions by the central government that directly affect the work of local governments;

The Thematic Working Group on Urbanism and Spatial Planning is part of the seven thematic groups of municipal councillors established within the project “Strengthening Municipal Councils”.